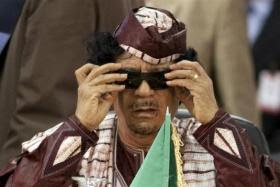 In a column posted on Time's website, Robert Baer said the sabotage would begin by blowing up pipelines to the Mediterranean. However he added that the same source had also told him two weeks ago that unrest in neighboring countries would never spread to Libya -- an assertion that has turned out to be wrong.

"Among other things, Gaddafi has ordered security services to start sabotaging oil facilities," Baer wrote. "The sabotage, according to the insider, is meant to serve as a message to Libya's rebellious tribes: It's either me or chaos."

The growing violence in Libya has forced a number of oil companies to shut in production in Africa's third-largest oil producer and disrupted flows from the country's export terminals.

Security forces have cracked down fiercely on demonstrators across the country, with fighting spreading to Tripoli after erupting in Libya's oil-producing east last week. As the fighting has intensified some supporters have abandoned Gaddafi.

Baer, a former Middle East CIA officer, said the source told him that as of Monday Gaddafi had the loyalty of only about 5,000 of the country's 45,000-strong regular army.

Paraphrasing the source, he said that Gaddafi had also ordered the release from prison of the country's Islamist militant prisoners in hopes they would act on their own to sow chaos.

Time magazine's intelligence columnist reported on Tuesday that Libyan leader Muammar Gaddafi has ordered his security forces to sabotage the country's oil facilities, citing a source close to the government.

Time magazine's intelligence columnist reported on Tuesday that Libyan leader Muammar Gaddafi has ordered his security forces to sabotage the country's oil facilities, citing a source close to the government.

There's certainly a great deal to know about this subject. I love all the points you have made.